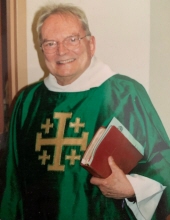 Rev. Caldwell was an Army veteran of World War II. A member of the Syracuse Chapter of the English-Speaking Union, he was a lifetime member of ARC, member of the Mason Lodge 559 in Walton and Rotary Club in Washington, and former president of the Gouverneur Luncheon Club. He was active in ministerial associations locally as well as in Gouverneur and Walton.

Rev. Caldwell was predeceased by his wife of 48 years, the former Dorothy Walsh, in 2000; son, Edward "Jerry" G. Caldwell, in 2015; and parents, Francis and Winifred.

Rev. Caldwell will be laid to rest with his beloved wife on Wednesday, June 1 at 11 a.m. in Greenlawn Cemetery, Warners.

To order memorial trees or send flowers to the family in memory of Rev. Edward F. Caldwell, please visit our flower store.