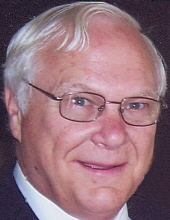 Richard D. Ungerer, 75, of Camillus, passed away Wednesday, October 24, 2018 at St. Joseph’s Hospital Health Center. A lifetime resident of the Syracuse area, he was a graduate of Nottingham High School and earned his bachelor's degree from St. Bonaventure. Upon graduation, Richard then served proudly in the US Army earning the rank of first lieutenant. He was employed with Oscar Mayer for 31 years and retired from Hofmann Sausage Co. after 15 years. In addition to raising his four children and caring for children in the foster care system with his wife, Richard spent endless hours selling Christmas trees for the Optimist Club, working at the Camillus Ski Association, organizing the West Genesee Talent Show, refereeing basketball games, helping to organize and run the Jr. and Sr. Women's Softball Program. His voice will always be remembered as an announcer for the WG Varsity Women's Soccer Team. Richard was an avid golfer, hunter, and fisherman, but above all, loved spending time with his family, especially during their trips to Cuba Lake, Lake George, and Lake Ontario.

Richard always had a smile on his face. He was someone who could strike up a conversation with a stranger and make them feel as if he had known them for years. He will always be remembered for his strength and as a fighter who never gave up, which are qualities that he instilled in his children and grandchildren.

Richard was predeceased by his parents, Arthur and Gertrude; and brother, Arthur “Bud.”

Relatives and friends may call Sunday, October 28 from 1 to 4 p.m. at the Buranich Funeral Home, 5431 W. Genesee St., Camillus.

A funeral Mass will be celebrated Monday, October 29 at 10:30 a.m. in St. Joseph's Church, 5600 West Genesee St., Camillus. Richard will be laid to rest in St. Mary's Cemetery, DeWitt.

In lieu of flowers, contributions may be made to the Fund for Johns Hopkins Medicine, 750 East Pratt St., 17th Floor, Baltimore, MD 21202 or to Camillus Winter Sports Association, 403 Blackmore Rd., Camillus, NY 13031.
To order memorial trees or send flowers to the family in memory of Richard D. Ungerer, please visit our flower store.