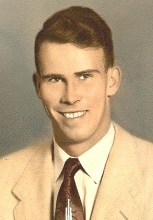 Richard “Dick” Harold Broome, 80, of Syracuse, passed away Wednesday, March 3, 2010 at St. Joseph’s Hospital Health Center. A lifetime resident of the Syracuse area, he was born on Monday, August 5, 1929 and was the son of Harold Albert Broome and Frances Henrietta Standley Broome. He was a graduate of Solvay High School. Dick was an Air Force veteran of the Korean Conflict. He was employed for over 35 years with Allen Tool Phoenix, Inc. Dick was a communicant of The Church of St. Michael & St. Peter. He enjoyed woodworking, photography, writing and building model planes and trains. Dick was predeceased by his wife, Rosemary, in April 2008; and sisters, Diana Kermes and Regina White. Surviving are his daughter and son-in-law, Christine and Dan Fuller of Glen Allen, Virginia; sister, Joyce Yates of Syracuse; and several nieces, nephews and cousins. Services will be at 8 a.m. Saturday, March 6 at Buranich Funeral Home, 5431 W. Genesee St., Camillus and at 9 a.m. in The Church of St. Michael & St. Peter where a funeral Mass will be celebrated. Relatives and friends may call Friday, March 5 from 5 to 7 p.m. at the funeral home. Dick will be laid to rest in Assumption Cemetery, Syracuse. In lieu of flowers, contributions may be made to the American Heart Assn., P.O. Box 3049, Syracuse, NY 13220-3049.
To order memorial trees or send flowers to the family in memory of Richard Harold Broome, please visit our flower store.