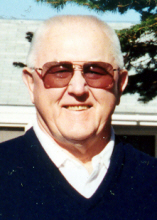 Robert W. Alger, 80, of the Village of Camillus, passed away Tuesday, January 11, 2011 at St. Joseph’s Hospital Health Center. Born Tuesday, March 25, 1930, he was the son of Willard Alger and Mabel Sealy Alger. He was raised in Sennett and lived in Camillus since 1971. Bob was a graduate of Weedsport High School and retired in 1990 as a letter carrier with the U.S. Postal Service in Camillus. He was a member of the Camillus Baptist Church. An avid golfer, Bob was a former member of the Camillus Country Club. He also volunteered for many years with Meals on Wheels. He was a Red Sox fan and enjoyed S.U. sports. He enjoyed spending time with his family, especially at their family camp in Caughdenoy. Bob was predeceased by his brother, Donald Alger. Surviving are his wife of 40 years, the former Emma Jeanne Lovell; daughter, Debra Kuepper of Camillus; son and daughter-in-law, Donald and Cathy Kuepper of Bridgeport; sister and brother-in-law, Jane and David Sinclair of Auburn; brother and sister-in-law, Raymond and MaryAnn Alger of Auburn; grandson, Ryan (Suzanne) Kuepper of Constantia; and several nieces and nephews. Relatives and friends may call Friday, January 14 from 4 to 7 p.m. at Buranich Funeral Home, 5431 W. Genesee St., Camillus. Services will be Saturday, January 15 at 10 a.m. at the funeral home. Burial will be private. In lieu of flowers, contributions may be made in Bob’s memory to Meals on Wheels ECHO, Inc., 4600 W. Genesee St., Syracuse, NY 13219.
To order memorial trees or send flowers to the family in memory of Robert W. Alger, please visit our flower store.