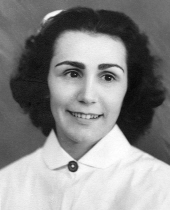 Ruth H. Schultz, 92, of Camillus, passed away Tuesday, March 23, 2010 at Van Duyn Home & Hospital. Born in Rochester on Friday, January 18, 1918, she was the daughter of Nicholas Peter Julian and Helen Wade Julian. She later resided on Syracuse´s west side and in Camillus. A graduate of Central High School, Ruth was also a 1941 graduate of Albany School of Practical Nursing. She lived a full and rich life dedicated to the nursing profession. She took leadership responsibiities in many community activities. She retired from Van Duyn Home & Hospital in 1984. During her nursing career, Ruth held the seat of Presidency of the LPN’s of New York, Onondaga County Division. She was instrumental in increasing membership of LPN’s in 1958 and was awarded a cup for the greatest increase. She also headed the NYC delegation of eight counties who adopted a statement of function for practical nurses. She was very active in the Practical Nursing Organization for approximately 25 years. Following retirement, Ruth worked part-time at James Square. She exemplified her devotion and compassion for the elderly by volunteering for senior programs in the 1980´s and 90´s. She was awarded for her community services, including Hospice and she served as an Ombudsman for St. Camillus and Van Duyn as well as a guild member for Van Duyn. Ruth also enjoyed crocheting and attending auctions. Surviving are her very dear and life-long friend and caregiver, Mary Ann Niedzwicki of Fairmount and all of the Niedzwicki family; nephew, Nicholas (Sue) Julian of Baldwinsville; nieces, Kristin Babcock of Kingston, Ontario, Kathy Edinger of Tully and Kim Schultz of Rochester; and her loyal dog, Angel. Services will be at 10 a.m. Saturday, March 27 in Holy Family Church where a funeral Mass will be celebrated. Burial will be private in St. Agnes Cemetery. Arrangements are by Buranich Funeral Home, Camillus. Contributions may be made in Ruth’s name to SPCA, 5878 E. Molloy Rd., Mattydale, NY 13211.
To order memorial trees or send flowers to the family in memory of Ruth H. Schultz, please visit our flower store.