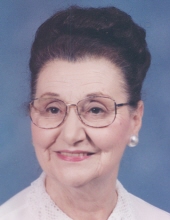 With a loving and grateful heart, and with an unwavering faith in her Lord, Santina Magdalena (Oddi) Ludwig was taken home on Friday, December 7, 2018, passing away peacefully after a long, productive and blessed life. "Santa," as she has been lovingly known, was 99, and passed away just four months shy of her 100th birthday.

Throughout her lifetime, what remained most important to Santa was her faith, family, friendship and music.

Raised in Lockport, NY, Santa, at the age of 30, married Herbert Ludwig. They made their life together in Barker, NY, where he was the music teacher at Barker Central School and made a significant contribution to the musical life of their community and the students within it. The auditorium at the school was rededicated as the Herbert F. Ludwig Fine Arts Auditorium. Santa also dedicated her life to the Barker students, who remembered her fondly for her work in the school’s cafeteria for many years. As a couple, Herb and Santa loved Barker and its residents. She especially cherished her many wonderful friends in Barker, including her close neighbors on Coleman Road and Pallister Avenue and her dear longtime friend, Maddie Chenez.

After Herb’s passing in 1984, Santa remained in Barker until she moved to Syracuse in 2006 to be with her daughter, Selma Ludwig Moore, and son-in-law, Kevin. There she found a new home and community of friends and neighbors with whom she formed close and meaningful bonds through activities at church and her involvement with the Note-a-belles, a female a capella group, and the Oasis Chorus. Singing with these groups, she formed close friendships, especially with Louise Sollecito and the late Rita Abrams. She enjoyed concerts of all kinds and became a part of the community at Onondaga Community College, where Selma and Kevin have taught in the music department for more than four decades. Santa made friends easily and enjoyed the companionship of those in her Onondaga Hill neighborhood.

While Santa enjoyed an enduring quality of life, and was always ready, willing and able for any adventure that presented itself with family and friends, she felt her advancing age in recent years, but was comforted by the care of many, including her physicians, providers and angelic caregivers over the last year. Santa, Selma and Kevin are eternally grateful for their expertise, love and compassion during this time.

Santa will be missed dearly by her family. Surviving are her devoted daughter and son-in-law, Selma and Kevin; loving family members, cousin, Colletta Wilson; and her sons, Lyman and David; their spouses, Lucia and Marilyn; and their children; cherished niece, Cynthia Oddi; as well as the extended families of her son-in-law’s seven siblings, a large and loving family in which she was cherished.

Relatives and friends may call Tuesday, December 11 from 4 to 7 p.m. at the Buranich Funeral Home, 5431 W. Genesee St., Camillus.

A funeral Mass will be celebrated Wednesday, December 12 at 12:30 p.m. in Holy Family Church, 127 Chapel Dr., Syracuse. Santa will be laid to rest in Cold Springs Cemetery, Lockport.

Those who knew Santa would say that she was a cute, sweet woman who would always end her meeting with a wink of the eye, a hug and a kiss and would implore you to leave each meeting with an, "I love you." Rest in peace, dear, Santa, knowing you are home with your loving husband, mother, siblings, family, friends and your Lord.
To order memorial trees or send flowers to the family in memory of Santina Magdalena (Oddi) Ludwig, please visit our flower store.