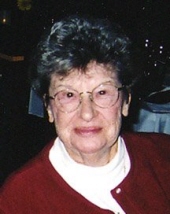 Sophie Joan Polacek, 87, formerly of Camillus, passed away Monday, August 3, 2009 at her daughter’s home in Exton, Pennsylvania, surrounded by her children and grandchildren. Born in Cato, she was the daughter of John and Catherine Bruska. She spent her early years on Horan Rd. in Solvay and lived in Seattle, Washington from 1944 until moving to Camillus in 1955. She resided in Exton since 2008. During World War II, Sophie worked as a welder for Carrier Corporation in Syracuse and for the Puget Sound Naval Shipyard in Bremerton, Washington. Later, she worked in private home health care for 21 years and as an election official for the Town of Camillus. She was a communicant of Holy Family Church in Fairmount for 53 years. Sophie loved nature and the outdoors. She and her husband and children camped and fished in many beautiful places, including Canada and the states of Washington and New York. She was a skillful trout fisher and enjoyed bird watching. Most of all, she loved gardening. With her extensive knowledge of horticulture, she created spectacular rock, vegetable, and flower gardens that drew admirers throughout the summer and fall. Sophie was also an accomplished cook and enjoyed cooking for family, friends, and her church community. She was devoted to her family. Surviving are her daughter and son-in-law, Kathleen and Andrew Moody, of Exton, Pennsylvania, with whom she made her home for the last year of her life; sons, John of Tucson, Arizona and Stephen of Fulton; seven grandchildren; one great-granddaughter; a brother, Arthur Bruska; and several neices and nephews. Sophie was predeceased by her husband of 60 years, Stephen, on May 30, 2007, and her sister, Laura Bruska. Services will be at 10 a.m. Friday, August 7, 2009 at the Buranich Funeral Home, Camillus and at 10:30 a.m. in Holy Family Church where a funeral Mass will be celebrated. Relatives and friends may call preceding the funeral from 9 to 10 a.m. at the funeral home. Sophie will be laid to rest at Resurrection Chapel Mausoleum, St. Mary’s Cemetery, DeWitt. Contributions in Sophie’s name may be made to Neighborhood Hospice, 400 E. Marshall St., West Chester, PA 19380.
To order memorial trees or send flowers to the family in memory of Sophie Joan Polacek, please visit our flower store.