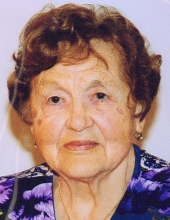 Wally Holzner, 98, of Menorah Park in Syracuse, passed away Wednesday, May 2, 2018. In March 2007 she moved to CNY from Yonkers, where she had lived with her late husband, George, and where she was active in German-American organizations.

Her life began as Walburga Riedmeier on January 23, 1920 in Obermondsberg, Germany, where she was raised and worked on her family’s farm until she was 17. Wally attended school in Rohr, Germany. Her arrival in the US was on Labor Day in 1937 and she became an American citizen in 1946. Before Wally’s marriage, she worked as a domestic in NYC and Florida and was a member of Elizabeth House, a German Catholic women’s club, and later the Catholic Kolping Society. It was during a Kolping dance in November of 1942 at Schwaben Halle in Brooklyn that she met Geoge Holzner. They married on January 23, 1944 in San Francisco, CA, where he was stationed with the US Army.

After the birth of their daughter, Imelda, and the end of WWII, they returned to NYC where their youngest child, Irmgard, was born. Wally, her new name as a citizen of the US, remained active in the Kolping Society, having served as secretary. She later joined the Bavarian Club. In Yonkers, she belonged to St. Barnabas Church. Wally became a member of the German American Society after her move to CNY.

Wally was predeceased by her husband, George; and daughter, Imelda.

Surviving are her daughter, Irmgard (Tom) Pastorello; granddaughter, Irena; beloved brothers, Ludwig and Alfons of Germany; and caring nieces and nephews in the US and Germany. With their shared interests in photography and world travel, Wally and her immediate family enjoyed a life of exploration and appreciation of the world’s great cultures.

Services will be held at a later date.