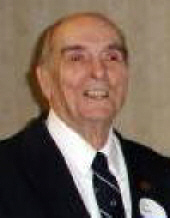 William A. Thomas, 89, of Camillus, passed away Monday, February 22, 2010 at Community General Hospital. Born in Syracuse on Wednesday, July 28, 1920, he was the son of William Henry Thomas and Ina Riker Moss Thomas. Bill was a Social Studies teacher for 33 years in Callicoon and Cato-Meridian. He received his bachelor's degree from Penn State University and master's degree from Syracuse University. While at Penn State, he was a member of Phi Kappa Sigma Fraternity. Bill was senior class advisor and track coach at Cato-Meridian. He was a member of the Syracuse Penn State Club and Onondaga Lodge IOOF #79. Surviving are his wife of 46 years, the former Jean Vamosy; daughter and son-in-law, Elizabeth Thomas and Mark Meager of Buffalo; sons and daughter-in-law, Christopher Thomas of North Syracuse and Jeffrey and Cathy Thomas of Pittsburgh, Pennsylvania; sisters and brother-in-law, Drusilla Barr of Syracuse and Nancy and Glenn Proseus of Sodus Point; brother and sister-in-law, Herbert and Fern Thomas of Cato; grandchildren, Sean, Eric, Ashley, Cody, Blaire, Chloe, Olivia and Blake. Services will be at 10 a.m. Thursday, February 25 at the Buranich Funeral Home, 5431 W. Genesee St., Camillus and at 10:30 a.m. at St. Joseph’s Church. Relatives and friends may call Wednesday, February 24 from 4 to 7 p.m. at the funeral home. Bill will be laid to rest in Greenlawn Cemetery, Warners. In lieu of flowers, contributions may be made to St. Joseph's Church Food Pantry, 5600 W. Genesee St., Camillus, NY 13031 or to one's favorite charity.
To order memorial trees or send flowers to the family in memory of William A. Thomas, please visit our flower store.