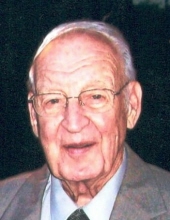 William B. McAfee Jr., 85, of Camillus, passed away Tuesday, October 14, 2014 at home. Born in Pennsylvania, he lived in Camillus since 1956. He retired after 45 years with Burns Bros., Inc. and was a member of the Plumbers and Steamfitters Local 267 for 65 years. Bill was a jazz drummer and an avid SU sports fan and also enjoyed watching the West Genesee Marching Band perform. He loved spending time with his family, especially his grandchildren and great-grandchildren. He enjoyed going to all their sporting and musical events. Bill's wife of 63 years, Margaret, passed away on October 4. He was also predeceased by his brother, Robert. Surviving are his daughter, Joanne (Donald) Shepard of Manlius; sons, Tom (Audrey) of Liverpool and Gary (Ann) of Camillus; grandchildren, Kristyn (Claude) Shaw, Matthew (Sarah) McAfee, Sara and Nicholas Shepard, and Jeffrey and Christopher McAfee; great-grandchildren, Tyler Allen and Isabelle Shaw; sister-in-law, Marilyn McAfee of Camillus; and many nieces and nephews. Services will be Friday, October 17 at 2 p.m. at the Buranich Funeral Home, 5431 W. Genesee St., Camillus. The family will greet friends prior to the service from 1:30 to 2 p.m. William will be laid to rest in Greenlawn Cemetery, Warners. In lieu of flowers, contributions may be made to the Alzheimer's Assn. of CNY, 441 W. Kirkpatrick St., Syracuse, NY 13204. Share condolences at www.BuranichFH.com
To order memorial trees or send flowers to the family in memory of William B. McAfee Jr., please visit our flower store.