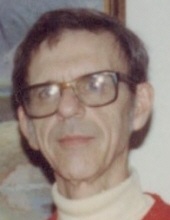 Adrian Scusa, 95, of Camillus, passed away Wednesday, April 8, 2020 at Loretto. Born in Seneca Falls, he joined the US Army Air Force immediately following high school and proudly served through WWII. While stationed in Iceland, he met and married the love of his life, Anna. Adrian remained in Keflavik after the war, working for a contractor building the airport there and then moved to Iran with the same firm to build a new dam. After returning to the US, he moved his family to Camillus and attended Syracuse University. Adrian graduated in 1964 and was a member of Phi Beta Kappa. He became owner of Adrian Scusa, CPA in Auburn. His faith was very important to him and he and his family were daily communicants of St. Joseph's Church. He also enjoyed teaching sixth grade at St. Lucy's.

Services will be private. Adrian will be laid to rest in Greenlawn Cemetery, Warners.

In lieu of flowers, contributions may be made to the Salvation Army, 677 S. Salina St., Syracuse, NY 13202.7 S
To order memorial trees or send flowers to the family in memory of Adrian Scusa, please visit our flower store.