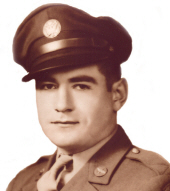 Bruno Paussa, 91, of Onondaga Hill, died quietly in his sleep early last Thursday morning, January 13, 2011 at the home that he had lived in for the past 52 years. Bruno retired from Halcomb/Crucible Steel. Bruno was predeceased by his wife, the former Evelyn Marchik; and his sister, Mary Bruna Salvagno. He is survived by his sister, Inez Armani; his brothers, Reno and Alfred; and numerous nieces and nephews. Bruno was born Thursday, December 11, 1919 near Gorizia, Austria to John and Olga Paussa. His family immigrated to Solvay in 1921. In November 1942, Bruno enlisted in the United States Army air forces and in March 1944, he was deployed to Tibenham, England where he served in the 445th Bomb Group of the Eighth Air Force as a gunner on a B-24 Liberator heavy bomber. Bruno was awarded the Air Medal and three Oak Leaf Clusters for his service during the Normandy, Northern France and Rhineland campaigns. He also received the Distinguished Flying Cross awarded for extraordinary achievement and displaying great skill and courage in the face of enemy attack. Bruno was a quick-witted and intelligent man who was generous with his time and resources. He cleared neighborhood driveways of snow into his eighties. A skilled cook (his pickled hot peppers were legendary) and gardener, Bruno shared his bounty with family and friends. He was an enthusiastic outdoorsman who enjoyed watching turkey and deer in his back yard. Hunting and fishing were passions that he pursued throughout his life. This past fall, at age 90, he shot his last deer. He will be missed. Relatives and friends may call Monday, January 17 from 4 to 6 p.m. at the Buranich Funeral Home, 5431 W. Genesee St., Camillus. A funeral Mass will be celebrated at 10 a.m. Tuesday, January 18 in The Church of St. Michael & St. Peter. Entombment will be in Resurrection Chapel Mausoleum, St. Mary's Cemetery, DeWitt. In lieu of flowers, contributions may be made in Bruno’s memory to The Church of St. Michael & St. Peter, 4782 W. Seneca Turnpike, Syracuse, NY 13215 or to Hospice of CNY, 990 Seventh North St., Liverpool, NY 13088.
To order memorial trees or send flowers to the family in memory of Bruno Paussa, please visit our flower store.