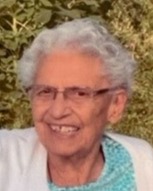 Catherine Rose (Farchette) Noboa, 98, of Camillus, passed away Saturday at home with her loving daughter, Cassandra, by her side whom she lived with. Born and raised in Syracuse, she moved to Camillus in 1966. Catherine attended high school in Syracuse and later returned to receive  her GED. She was the first female head custodian at West Genesee High School, where she was employed for over 10 years. Affectionally known as Kay, Ro or Rosie, Catherine’s most favorite titles were “Mom”, “Gram” and “Big G.”  When Cassandra started documenting her life and events as a full-time caregiver to her mom with dementia, Catherine earned the nickname “Tripsy”.

Catherine was a communicant of St. Joseph's Church in Camillus. In her younger age, she was an exceptional golfer and an avid bowler. Catherine was very creative, and her family remembers fondly how she would tackle home improvements and make the best manicotti for Christmas dinner each year. In her later years, she enjoyed trying her luck at Turning Stone casino with her sisters, Cora and Mary, and daughter, Catherine. She traveled to California, Florida and Hawaii, enjoyed boat rides with Cassandra and son-in-law, Tom, and riding a motorcycle in her 90s!  She ate donuts each morning with coffee made by Tom, a.k.a. the “coffee guy.” Catherine also enjoyed a good party with family and friends, or sipping a cold beer on a hot summer day by the pool. Her hobbies included watching sports on TV, whether it was golf or cheering for the New York Yankees (even though she lived in a Red Sox house.)

Catherine cherished watching her grandson, Shawn, play hockey, and her face would light up with joy. She loved her grandchildren and watching them grow older. Catherine was immensely proud of her grandchildren and hearing about their accomplishments. For the past 12 years, she resided with Cassandra and her family. She loved spending time with them, their friends, and their four dogs, especially Sid, who took an extra shine to her and was seen by her bedside often as her dementia progressed.

Catherine’s family is extremely grateful for the guidance and compassion received from Hospice of Central New York during her final days.

Surviving are her daughters, Catherine (Bob) Stapleton of Florida and Cassandra (Tom) Lynch of Camillus; grandchildren, Sarah (Tim) Doerr, Shawn and Emily Lynch; and great-grandchildren, Madison and Alec Doerr, and Sofia Lynch, who is expected in March of 2023, whose arrival Catherine was very excited about. Also surviving are many nieces and nephews.

Catherine will be laid to rest in Greenlawn Cemetery, Warners.

In lieu of flowers, the family requests donations be made to the Alzheimer's Association Central New York Chapter, P.O. Box 12226, Syracuse, NY 13218, in hopes of finding a cure for this horrible disease.
To order memorial trees or send flowers to the family in memory of Catherine Rose (Farchette) Noboa, please visit our flower store.