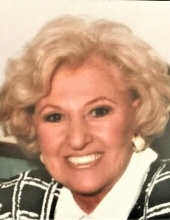 On November 11, 2021, Dr. Marie Barry, 92, finally stopped to rest after a very spirited, loving, and faith-filled life. Having led her family in many a rousing song during her lifetime, it was only fitting that she spent her final hours listening to their earnest though less skillful versions of her favorite tunes.

Marie was born, as she liked to say, “on the kitchen table” in Garfield, NJ to two immigrants who passed on a strong work ethic to their four children. Accompanying Marie into the world was her identical twin, Amelia, with whom Marie remained close her entire life. With light blonde hair and big blue eyes, the two were hard to tell apart and even harder to keep apart, opting to both share a college dorm room in their 20s and travel the world together as retirees, with many visits and vacations in between. Among their adventures together were trips to China, Africa, the Galapagos, and Marie’s personal favorite, Italy.

Marie was proud to tell people that she was lucky to have a father who encouraged his three daughters to go to college at a time when many women lacked the same support and opportunity to do so. Her older sister Goldie became a vice-president of Equitable Insurance and her twin Amie became a chemistry teacher. Marie not only graduated from Adelphi University in 1951, but she also went on to Georgetown Medical School, graduating as a member of Alpha Omega Alpha Society at the top of her class in 1955. Marie was proud to graduate along with many returning GIs. When Marie started at Georgetown, she was one of 11 women in the class; by graduation, only five women remained. During her time in medical school, Marie fell in love with the field of pediatrics. She loved babies and the feeling was clearly mutual. Marie did her pediatric residency at St Michael’s Hospital in Newark, NJ and later worked as a school physician and medical educator for several schools in the Central New York area.

While at Georgetown, Marie also fell in love with a tall and equally hard-working medical student from Central New York, Joseph Barry, to whom she was married for 34 years and shared six children and six grandchildren. As proud as Marie was to be a doctor, she was even prouder to be a loving and lively wife, mother and grandmother. She made a beautiful home for her family in Camillus, New York where she lived for over 50 years. Not a holiday went by without Marie decorating her family room and front stoop in the spirit of the season, nor did she miss an opportunity to celebrate occasions both big and small with a platter of shrimp and a bottle of champagne. This zest for life was apparent to everyone who met Marie, as people often remarked on her sass, her wit, and her energy—“dashing as usual” was one of her favorite sign-offs. Marie’s visual design skills also included her sense of personal style. Although only five feet tall, you couldn’t help but notice her when she walked into a room: her bright blue eyes, her big smile, her signature leopard print sweaters that she could and still did rock at age 92.

Marie was also a talented singer and dancer. She raised her children to appreciate music, and not from the sidelines. Show tunes often blared from the stereo speakers both inside and outside the house, with Marie leading her children in spirited renditions of songs they still sing to each other and sometimes to innocent bystanders. Her voice was strong and joyous, and it bubbled out of her often, whether at church, by the pool, in the family room, or while walking around the neighborhood. She also loved to dance throughout her life, and finally found time for this passion in retirement. She participated in several dance groups, from country-line dancing to tap, performing with her good friend Marge as part of Our Town Tappers at the New York State Fair. She’d then join her family to sample baked potatoes and pizza frittes, and sip chocolate milk in the Dairy Building while admiring the butter sculpture.

Part of Marie’s positive energy was rooted in her belief that she was blessed with what she called the five “Fs”: Faith, Family, Friends, (Physical) Fitness, and Financial security. She was grateful for all five, but derived the most joy from the first three. She was a generous, thoughtful friend, lucky to spend many Saturday nights, often at her favorite restaurant, The Inn Between, with her close friend, Faye Panasci, with whom Marie also traveled the world. Although she outlived most of her friends, memories of her closest, Faye, Ginny, Helen and Rose, stayed with her always. She also treasured family friend Sara Mariano.

Marie’s deep and abiding faith also played a major role in her life and was at the core of her strong moral backbone. A 50-year member of St. Joseph’s Church, she was a reader, a eucharistic minister, and, for many years, a daily Mass attendee. As a Catholic, Marie recognized human frailty but also believed in the essential goodness of people. Her faith rooted her, it sustained her in times of hardship, and it helped ease her transition from this life to the next. Marie knew when she left this world that Jesus would be holding her hand the rest of the way home.

Love for her family also buoyed Marie throughout her life. She was a devoted, generous, and loving mother and grandmother and an essential anchor for family gatherings and celebrations. Some of those took place in locations far from home, such as the Caribbean, Mexico, Thailand, or the occasional dude ranch, but many more happened in front of her favorite fireplace or around her kitchen table. “Nana” was the bright star around which her children and grandchildren orbited, and they already keenly miss her voice, her humor, her spunk, and above all her loving heart. “Live your life with LOVE” is a phrase she taped to her kitchen cupboard, and it is Marie’s ultimate lesson and legacy.

Surviving Marie and hoping to continue that legacy are her six children, Brenda Barry (Vickie Gayle), Joseph Barry (Debbie), Brigid Barry, Marijo Barry, William Barry, and Brian Barry (Annette), and her six grandchildren, Brody Brown, Kyle Barry, Shannon Dorrance (Chad), Darby Douros, and Connor and Sienna Barry. Also surviving are Susan Walker and family and Anne Trott and family. Her loved ones know Marie has faith in their ability to sustain the close bonds between them that she has nurtured and so enjoyed, and in their ability to keep on singing. Loudly. Joyously. Together.

Marie’s funeral services will be December 28th, at 10:30 a.m. at St. Joseph’s Church, located at 5600 W. Genesee Street, Camillus, NY, Contributions in Marie’s memory can be made to Father Champlin’s Guardian Angel Society: www.guardianangelsoc.org.
To order memorial trees or send flowers to the family in memory of Dr. Marie Barry, please visit our flower store.