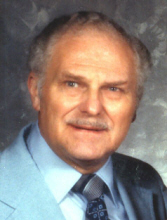 Edward J. (Kolakowski) Kole, 87, of Fairmount, passed away Saturday, July 23, 2011 at Van Duyn Home & Hospital. Born in Syracuse on Sunday, September 30, 1923, he was the son of Chester and Jessie Kolakowski. A lifetime resident of the Syracuse area, he was a graduate of Central High School. Edward was employed by Carrier Corp. for more than 30 years, retiring in 1988. A veteran of World War II, he served in the Army Air Force as a radio operator. He was a communicant of Holy Family Church, enjoyed music, the outdoors and was an avid fisherman. He was a devoted grandfather. Surviving are his wife of 59 years, the former Shirley A. Martin; daughter, Christine of Syracuse; son and spouse, Glenn and Maryann of Camillus, sons, Gary of Syracuse and Gregory of California; grandchildren, Michael, Dan, Stephanie and Joshua; and several nieces, nephews and cousins. A funeral Mass will be celebrated at 10 a.m. Tuesday, July 26 at Holy Family Church. There are no calling hours. Edward will be laid to rest in the Onondaga County Veterans Memorial Cemetery. Arrangements are by the Buranich Funeral Home, Camillus. In lieu of flowers, contributions may be made to Alzheimer's Association of CNY, 441 W. Kirkpatrick St., Syracuse, NY 13204.
To order memorial trees or send flowers to the family in memory of Edward J. Kole (Kolakowski), please visit our flower store.