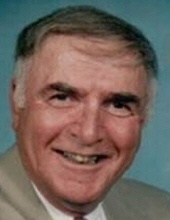 Edward M. Cahill, 86, of Syracuse, passed away Tuesday, March 24, 2020 at The Nottingham. Born and raised in Worcester, he lived in Buffalo before moving to Syracuse. He was a graduate of North High School and received his bachelor’s degree from Worcester Polytechnic Institute. He was an Army veteran. Edward retired from E.M. Cahill Co. in Syracuse and previously worked for Buffalo Forge Co. and Cincinnati Fan Co. He was a former officer for ASHRAE, the American Society of Heating, Refrigerating and Air-Conditioning Engineers. An avid Red Sox fan, he also enjoyed golfing and fishing. Above all, he loved spending time with family and friends.

Edward was predeceased by his parents, Edward and Anna.

Calling hours and services were private. A celebration of Edward’s life will be held at a later date for family and friends. Edward will be laid to rest in Greenlawn Cemetery, Warners.

In lieu of flowers, contributions may be made to American Parkinson Disease Association, 135 Parkinson Ave., Staten Island, NY 10305 or to Covenant House, P.O. Box 731, New York, NY 10108.
To order memorial trees or send flowers to the family in memory of Edward M. Cahill, please visit our flower store.