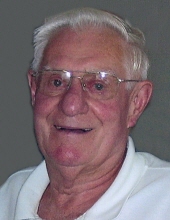 Edward P. Himpler, 85, of Camillus, passed away Friday, June 1, 2018 at home, surrounded by his loving family. Ed was born September 14, 1932, son of the late Frank and Mary (Henchen) Himpler. A 1951 graduate of Solvay High School, he served in the Army Infantry during the Korean War and was a MP 1952-53, honorably discharged and received many medals. Ed was a 60-year roofing foreman for Local 195, retiring in 1994. He married Marianne Shetley in 1955 and had 62 memorable years with many blessings, especially their son, Ben. Ed was a creative woodworker, he could fix anything and rebuild motors. He enjoyed fishing with Ben at their summer cottage, weekend antiquing with Marianne, but above all, loved family togetherness.

Friends may greet the family on Tuesday, June 5 from 9 to 10 a.m. at the Cathedral of the Immaculate Conception, 259 East Onondaga St., Syracuse.

A funeral Mass will follow at 10 a.m. in the church. Burial with military honors will be in St. Mary's Cemetery, DeWitt.
To order memorial trees or send flowers to the family in memory of Edward P. Himpler, please visit our flower store.