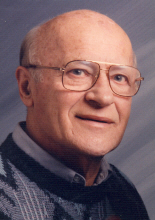 Edward S. Waleski, 82, of Camillus, passed away Thursday, March 18, 2010 at home. Born in Syracuse on Thursday, May 5, 1927, he was the son of Stanley Waleski and Martha Renk Waleski. He lived in Lyncourt before moving to Camillus in 1953. He was a graduate of CBA and attended LeMoyne College. An Army veteran of World War II, he was employed by Niagara Mohawk Power Corp., retiring in 1988 after 36 years. He was a communicant of Holy Family Church. Ed was a fan of the Boston Red Sox and SU basketball. He enjoyed traveling, especially to Myrtle Beach, Florida, Niagara Falls and the Adirondacks. He also loved to visit casinos, spend time in his garden and play with his grandchildren. Surviving are his wife of 58 years, the former Eva Barton; daughter and son-in-law, Tina and Tim Moran of Onondaga Hill; sons and daughters-in-law, James and Sue of Marcellus, Edward of Camillus, Paul of Liverpool, Bill of Romulus, Rich and Lisa of Camillus and Don and Ann Waleski of West Monroe; grandchildren, Jim (Jen), Nicole, Christopher, Timmy, Michael, Melissa and Maya; great-grandchildren, Sabreena, Sophia and Savanna; sisters and brother-in-law, Marie and Al Wieczorek of Mattydale, Irene Waleski of Syracuse and Betty Avery of East Syracuse; and several nieces, nephews and cousins. A funeral Mass will be at 10 a.m. Tuesday, March 23 in Holy Family Church. Relatives and friends may call Monday, March 22 from 4 to 7 p.m. at the Buranich Funeral Home, 5431 W. Genesee St., Camillus. Ed will be laid to rest in Greenlawn Cemetery, Warners. Contributions may be made to American Cancer Society, 6725 Lyons St., P.O. Box 7, E. Syracuse, NY 13057 or to Hospice of CNY, 990 Seventh North St., Liverpool, NY 13088.
To order memorial trees or send flowers to the family in memory of Edward S. Waleski, please visit our flower store.