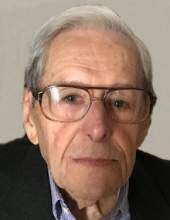 Emil Maurice DeLorenzo, 96, of Lakeland, passed away Tuesday, July 30, 2019 at home, surrounded by his loving family following a brief illness. The son of Maurice and Carmela DeLorenzo, he was the first generation in his family to be born in America. A lifetime resident of Syracuse, Emil lived on the northside for 65 years before moving to Lakeland. He was a graduate of North High School and served in the Army during WWII. Emil was employed as a salesman at Lincoln Supply for over 30 years. He was a communicant of Saint Marianne Cope Parish. Emil enjoyed gardening, home projects, fixing things, watching the stock market and making wine. He loved being outdoors during all seasons, especially plowing his own driveway and mowing his own lawn. He always helped his friends and family solve problems as they were often told to “ask Uncle Emil.”

The family wishes to thank the staff at Hospice of CNY and Saint Marianne Cope Parish for their love and support of Emil.

Relatives and friends may call Thursday, August 1 from 4 to 7 p.m. at the Buranich Funeral Home, 5431 W. Genesee St., Camillus.

A funeral Mass will be celebrated Friday, August 2 at 11 a.m. in Saint Marianne Cope Parish at Our Lady of Peace building, 203 Halcomb St., Syracuse, NY 13209. Emil will be laid to rest in Assumption Cemetery, Syracuse.

In lieu of flowers, contributions may be made to Hospice of CNY, 990 Seventh North St., Liverpool, NY 13088 or to Saint Marianne Cope Parish, 105 Stanton Ave., Solvay, NY 13209.
To order memorial trees or send flowers to the family in memory of Emil Maurice DeLorenzo, please visit our flower store.