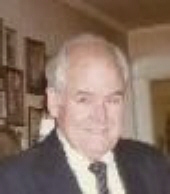 H. "Bud" Talmadge Naron, 84, of Camillus, passed away Monday, July 13, 2015 at St. Joseph's Hospital Health Center. Born and raised in Whiteville, NC, he spent most of his adult life residing in Bath, NY. He was a graduate of Whiteville High School and received an associate's degree in Business Administration from LaSalle University in Philadelphia. Bud was an Army veteran of the Korean War.  After the Army, Bud took a job distributing inter-office mail at Ingersoll Rand in Philadelphia.  He quickly worked his way up to office manager.  In 1967, he was selected to head a new program in Painted Post, NY managing the overhaul of Navy shipboard air compressors.  He led that very successful program until his retirement from Dresser-Rand after 32 years.  Bud loved spending time with his family.  He was an avid Dallas Cowboy fan, and also loved fishing and playing poker. Bud was predeceased by his brothers, Reuben, Robert and Tommy Naron; and sister, Virgie Bartley. Surviving are his wife of 61 years, the former Eleanore Purtell; daughter, Jenifer (Brian) Kilroy of Syracuse; sons, Larry (Carol) Naron of Oswego and George (Lynn) Naron of Long Island; grandchildren, Abigail and Jack Kilroy, Andrew, Alan Michael, Kate, Maggie and Laura Naron; sister, Flossie Inman of Lake Waccamaw, NC; and several nieces, nephews and cousins. Relatives and friends may call Friday, July 17 from 12:30 to 1:30 p.m. at the Buranich Funeral Home, 5431 W. Genesee St., Camillus.  Services will follow at 1:30 p.m. at the funeral home.  Bud will be laid to rest in Onondaga County Veterans Memorial Cemetery.
To order memorial trees or send flowers to the family in memory of H. Talmadge Naron, please visit our flower store.