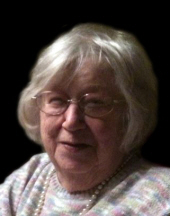 Helen Bogdon Hopkins, 86, of Camillus, beloved wife, mother, grandmother, great-grandmother, teacher and friend, passed away Saturday, May 8, 2010 at Community General Hospital. Mrs. Hopkins was born in North Tonawanda, New York in 1924 and was the daughter of John and Catherine Bogdon, who immigrated to this country from the Ukraine. She graduated from Syracuse University, receiving her Bachelor and Master’s of Art degrees in 1946. It was at Syracuse University that she met Tom Hopkins, her devoted husband of 63 years. Mrs. Hopkins was a teacher of foreign languages in the West Genesee School District for 22 years, writing curriculum for Spanish at the junior high level and serving as district chairperson for foreign languages until her retirement in 1983. She continued her advocacy for education in her retirement as a member of the New York State Retired Teachers’ Association and the Onondaga County Retired Teachers’ Association. Mrs. Hopkins was an avid theatergoer, bridge player, reader and fan of the Orange. Her civic associations were many. She served as a member of the SU Alumnae Club, as a former trustee of the Fairmount Community Library, and as co-founder of the Fairmount Community Book Club. In addition, she supported the Camillus Historical Society and the Everson Museum through her membership. Her name could often be found in the Sunday Post-Standard bridge standings as a member of both the Stonehedge and Western Hills Bridge Clubs. She was a member of Tuscarora Golf Club and an active parishioner of Holy Family Church and loyal communicant at the 10:30 Mass. Mrs. Hopkins believed that her greatest achievement was her family. Her commitment to this endeavor lives in the love of her husband, Thomas; her children and their spouses, Kathleen and John Spencer of Boston, Massachusetts, Mary Louise and Ernest Lamberti of Plattsburgh, New York, and Daniel and Joan Hopkins of Syracuse, New York; her grandchildren, Sarah Spencer Welsh and Benjamin Spencer, Matthew and Jonathan Lamberti, Lauren and Thomas Hopkins; and her great grandchildren, Graham and Jacob Welsh. Relatives and friends may call Monday, May 10 from 4 to 7 p.m. at the Buranich Funeral Home, 5431 W. Genesee St., Camillus. A funeral Mass will be celebrated at 10 a.m. Tuesday, May 11 in Holy Family Church. Helen will be laid to rest in St. Agnes Cemetery, Syracuse. In lieu of flowers, contributions may be made to Holy Family Church, 127 Chapel Dr., Syracuse, NY 13219.
To order memorial trees or send flowers to the family in memory of Helen Bogdon Hopkins, please visit our flower store.