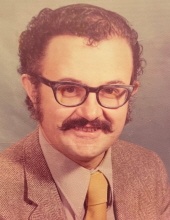 James A. Palumbo, 87, of Camillus, passed away Wednesday at home. Born and raised in Seneca Falls, he lived in Hudson, before moving to the Syracuse area in 1961. James was a graduate of Mynderse Academy in Seneca Falls and received his master’s degree from SUNY Brockport. He was principal at Onondaga Hill Middle School before retiring in 1992 and later worked as an interim principal for several school districts in the surrounding areas. He was a member of the Teachers' Union, New York State Administrators' Union and Optimist Club. He was also past president of the Camillus Youth Hockey Association and former youth baseball and hockey coach. Former president of Lorton Lake Association, James loved going to the family camp in Orwell. An avid fan of the NY Yankees and SU sports, he enjoyed computers, dogs, and playing the piano. Above all, James loved spending time with his family, especially his grandchildren.

James was predeceased by his parents; brother, William; and sisters, Anita, Elizabeth, Florence, Marie and Gloria.

Surviving are his wife, the former Dorothea Curtis; daughters, Shelley (Dan Handschy) Palumbo of Onondaga Hill and Mary Beth (Jamie) Williams of Syracuse; sons, James (Katherine) of Camillus and Steven (Marilyn) of Romulus; seven grandchildren; and many nieces and nephews.

In lieu of flowers, contributions may to the Camillus Erie Canal Society, 109 East Way, Camillus, NY 13031.

Share condolences at www.BuranichFH.com
To order memorial trees or send flowers to the family in memory of James A. Palumbo, please visit our flower store.