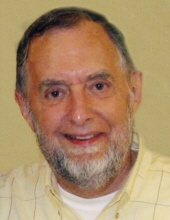 John G. Grim, 85, of Syracuse, passed away Friday at home after a long battle with spinal stenosis and dementia. Born in Louisville, KY, where he resided until the death of his father, his family relocated to Elmira, where he lived until settling in Syracuse in 1966. A graduate of Southside High School in Elmira, he also received a bachelor’s degree from SUNY Oswego and a master’s degree from Canisius College. He was an Army veteran of the Korean Conflict and served in the Security Agency. John worked within the education system for over 30 years. He held several different roles, including teacher, guidance counselor, assistant principal, business manager and retired in 1991 as business administrator. A communicant of St. Michael’s & St. Peter’s Church, John was also a Eucharistic minister, member of the Nocturnal Adoration Society at Holy Family Church, and member of the Knights of Columbus. A great handyman, John was also very active with the Boy Scouts of America for more than 50 years as well as the Longhouse Council Museum. Most of all, he enjoyed spending time with his family.

John was predeceased by his parents, Burr and Margaret Grim, and sister, Gail Fritz.

Relatives and friends may call Thursday, August 19 from 4 to 7 p.m. at the Buranich Funeral Home, 5431 W. Genesee St., Camillus. Facial coverings are required.

A funeral Mass will be celebrated Friday, August 20 at 10 a.m. at The Church of St. Michael & St. Peter, 4782 W. Seneca Turnpike, Syracuse. A private burial will be held in St. Peter and Paul’s Cemetery, Elmira.

In lieu of flowers, contributions may be made to Hospice of CNY, 990 Seventh North St., Liverpool, NY 13088 or to the William Hillcourt Museum and Carson Buck Library, 491 Kibbie Lake Rd., Constantia, NY 13044.

Share condolences at www.BuranichFH.com
To order memorial trees or send flowers to the family in memory of John G. Grim, please visit our flower store.