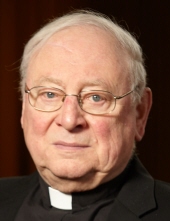 Most Rev. Thomas J. Costello, retired Auxiliary Bishop of the Diocese of Syracuse, died on Friday, February 15, 2019, at the age of 89 years old. Bishop Costello served the people of the diocese as a Roman Catholic priest for nearly 65 years as well as serving as the auxiliary bishop for over 40 years.

A native of Camden, New York, Costello was the son of James and Ethel (Dupont) Costello. As an only child, he shared his vocation to the priesthood with his parents. His father’s response was, “If that is what you want to do, be a good one.” That was his father’s blessing and he lived up to that charge his entire life.

He graduated from St. Aloysius Academy in Rome, New York before continuing his studies at Niagara University, St. Bernard’s Seminary in Rochester, Theological College in Washington, DC and Catholic University of America, School of Canon Law, in Washington, DC.

Costello received many papal honors, including being named a papal chamberlain with a title of monsignor in 1965, elevated to honorary prelate in 1971 and Titular Bishop of Perdices and Auxiliary Bishop of Syracuse in 1978. He was appointed by Pope Paul VI and ordained auxiliary bishop on March 13, 1978 at the Cathedral of the Immaculate Conception in Syracuse, choosing his Episcopal motto to be “As One Who Serves.”

Bishop Costello served on many boards in the community and across the country, including Jubilee Homes, Le Moyne College, the then Syracuse Interreligious Council, WCNY, Loretto and more. He was very active on the national scene, belonging to many committees of the United States Conference of Catholic Bishops, including time as chairman of the Communications Committee.

Bishop Costello’s legacy will most notably be being a man of deep faith and a man of the people. He had no tolerance for any injustice. He was in the forefront of speaking against racism, poverty, inequality, violence and more. He marched in Selma, Alabama, with Dr. Martin Luther King, fought for employee rights, spoke against the death penalty, promoted the respect and dignity of all life, encouraged interfaith dialogue and equality for all. He very much believed that we are called to be peacemakers and he strived to live his life emulating that belief.

Bishop Costello will also be remembered for being a passionate preacher with a booming voice and being the man to get things done in the diocese and the greater community. He was a scholar who was consistently approachable to all.

Bishop Costello submitted his resignation as auxiliary bishop on his 75th birthday in 2004 and remained vicar general until 2009. In his retirement, he continued to serve the people of the diocese, confirming young people, offering spiritual direction and always taking a call from people in their time of need. He was a man who loved rooting for the Orange, both women and men. But most of all, Bishop Thomas Costello was a man who lived his faith each and every day, celebrated being a child of God and lived out every word of his motto, “As One Who Serves.”

The Diocese of Syracuse is grateful for the tremendous care of Bishop Costello by St. Joseph’s Hospital, Loretto and Francis House.

Reception of the body will take place on Thursday, February 21 at 4 p.m. in The Cathedral of the Immaculate Conception in Syracuse.

Visitation will be from 4 to 7 p.m. at which time the vigil service will take place.

A Mass of Christian Burial will be celebrated at 11 a.m. on Friday, February 22 at the Cathedral of the Immaculate Conception. Burial will follow at St. Peter’s Catholic Cemetery in Rome, New York.

Contributions in his name can be made to the Light a Child’s Future Fund, which provides tuition aid to Catholic school students in the diocese.
To order memorial trees or send flowers to the family in memory of Most Rev. Thomas J. Costello, please visit our flower store.