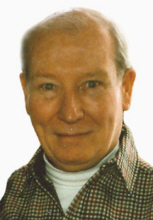 Patrick J. McPhillips, 81, of Syracuse, passed away Tuesday, March 2, 2010 at Francis House. Born in the Bronx on Wednesday, January 9, 1929, he was the son of Patrick McPhillips and Josephine Tallon McPhillips. He lived in the Valley area for more than 40 years. A 1954 graduate of Syracuse University, Patrick was a Marine Corps veteran of World War II. He began as an architect for the State of New York and then as a cost estimator for Syracuse area general contractors, the last being J.B. Stauffer Construction Co. when he retired in 1995. He was predeceased by his son, Stephen. Surviving are his wife of 58 years, the former Irene Wisniewski; son and daughter-in-law, P.J. and Peggy McPhillips of Camillus; daughter and son-in-law, Julie and Brian Messenger of Trumansburg; sister, Rita Culhane of Carmel; grandchildren, Kerry, Lindsey, Kevin, Lauren, Ann and Neile; niece, Cathy; nephew, Tom; and sister-in-law, Barbara Staino of New Jersey. Relatives and friends may call Saturday, March 6 from 3 to 5 p.m. at the Buranich Funeral Home, 5431 W. Genesee St., Camillus. Graveside services will be at the convenience of the family at Onondaga County Veterans Memorial Cemetery. In lieu of flowers, contributions may be made to Francis House, 108 Michaels Ave., Syracuse, NY 13208.
To order memorial trees or send flowers to the family in memory of Patrick J. McPhillips, please visit our flower store.