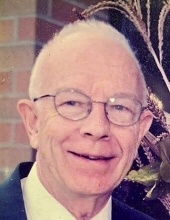 Richard “Dick” P. Kopp, 89, of Camillus, passed away Wednesday at St. Joseph’s Health Hospital. Born in Syracuse, he was a graduate of St. Anthony of Padua and St. Andrew's Seminary in Rochester. Dick retired from naval service as a senior chief petty officer. He was "piped over" at retirement from the last of seven ships, guided-missile cruiser USS ALBANY (CG-10). He later worked as an Air Force suggestion program manager and then with the Army as a communications analyst. Dick volunteered as a van driver for Fairmount Gardens and Solvay Senior Apartments. He was also an avid tennis player but above all, loved spending time with his family.

A funeral Mass will be celebrated Tuesday, January 11 at 10 a.m. in Holy Family Church. Dick will be laid to rest in Onondaga County Veterans Memorial Cemetery with full military honors.

In lieu of flowers, contributions may be made to one's favorite charity.
To order memorial trees or send flowers to the family in memory of Richard "Dick" P. Kopp, please visit our flower store.