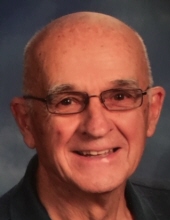 Robert “Bob” Herold, 88, of Howlett Hill, passed away on July 28, 2019 in Doylestown, PA, surrounded by his children. The son of Joseph and Lucille Herold, Bob was born in Chicago and grew up in Dunmore, PA. After serving in the Air Force for three years, Bob moved to Syracuse where with his father, Bob, built and ran greenhouses on West Seneca Turnpike. He later went on to manage Agway Garden Stores in Camillus and North Syracuse. Bob was active in the community, volunteering with the Boy Scouts, Howlett Hill Fire Department and Red Cross. Bob loved being outdoors and was often seen working in his yard.

Bob was predeceased by his wife of 59 years, Gerri Herold.

Services will be held at the Onondaga County Veterans Memorial Cemetery Chapel at 11 a.m. on Saturday, September 14.

In lieu of flowers, contributions in Bob's name may be made to Cycle for Survival, c/o Memorial Sloan Kettering Cancer Center, P.O. Box 27432, New York, NY 10087.
To order memorial trees or send flowers to the family in memory of Robert "Bob" Herold, please visit our flower store.