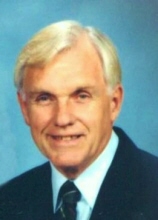 Robert "Bob" Thomas Gordon, 87, of Camillus, passed away peacefully Wednesday, January 20, 2016 surrounded by his family.  Bob was born on February 15, 1928 in Port Chester, NY to William and Mary Gordon.  He followed to Heaven his parents; brother, William (Helene); sister, Joan; nephew, Thomas and daughter-in-law, Marlene. Bob is survived by his loving wife of 57 years, Barbara; children, Greg Gordon, Melinda (Peter) O'Dell, Paul (Tracy) Gordon, and Susan (Victor) Taylor; grandchildren, Scott (Shyla), Rachel, Brian, Shannon, Jack, Benjamin and Madeleine; great-granddaughter, Brooke; niece, Marianne Gordon; and his Kentucky family. Bob left high school to join the U.S. Navy and proudly served during World War II and the Korean War on the USS Wisconsin and USS New Jersey.  After his military service, he was a New York State Trooper before beginning his career in the insurance industry where he rose to president and CEO of Unity Mutual Life Insurance Co. at the young age of 40.  After leaving Unity Mutual, Bob spent many years consulting in insurance and with various start-up companies.  He served on many boards and committees, most notably the NYS Banking Board, where he was the youngest member appointed at that time.  He was a lifelong Republican and served as CNY chairman for the re-election of Governor Nelson Rockefeller, as well as many other elections and campaigns. Throughout his life, Bob enjoyed golf, had a passion for cooking and loved spending time with family and friends.  He was an avid storyteller, generously sharing his diverse work experiences, knowledge and many adventures.  He asked to be remembered by two words, "He tried." Relatives and friends may call Friday, January, 29 from 4 to 7 p.m. at the Buranich Funeral Home, 5431 W. Genesee St., Camillus. A funeral Mass will be celebrated Saturday, January 30 at 11 a.m. in Holy Family Church. Spring burial will be in Greenlawn Cemetery, Warners. In lieu of flowers, please consider honoring and remembering Bob with a donation to the VA Affairs Medical Center, 800 Irving Ave., Syracuse, NY 13210. The Gordon family will forever be grateful for the amazing doctors and nurses who showed great care and compassion for Bob and his family.
To order memorial trees or send flowers to the family in memory of Robert Thomas Gordon, please visit our flower store.