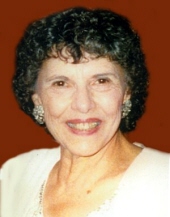 Rose Trovato Basile, 93, of Camillus, the daughter of Joseph and Grace Trovato, passed away Tuesday, September 22, 2009 at St. Camillus Health & Rehabilitation Center with her loving family by her side. Born in Charleston, West Virginia on Tuesday, February 29, 1916, she lived in Syracuse until moving to Camillus in 1956. Rose graduated from St. Mary's Cathedral and was employed for 10 years with Smith Corona, retiring in 1964. She was also formerly employed by Dey Bros. and the Addis Co. Rose was a communicant of St. Joseph's Church and former communicant of St. Peter’s Italian Church. A former PTA president of the Cleveland School, she was also a former member of the Women's Knights of Columbus. She enjoyed cooking and playing cards with her friends. She enjoyed spending time with her family, especially her grandchildren and great-grandchildren. Rose was predeceased by her husband, George, on May 26, 2002; brother, Louis Trovato; sisters, Mary Sferrazza, Edith Barnell, Angie Torrillo and Vera Lees; and granddaughter, Shari Ann Riccelli-Pooler, on June 21, 2001. Surviving are her daughters and sons-in-law, Sandra and Carmen Riccelli and Grace and James Russell, all of Camillus; grandchildren, Lisa (James) Kline, Shawn (Tammy) Fresina, Lon (Kim) Riccelli and Tiffany Fresina; great-grandchildren, Morgan Shaye Kline, Alexis Taylor Kline, Nathan M. Pooler and Gianna Rose Fresina. Services will be at 10 a.m. Friday, September 25, 2009 at the Buranich Funeral Home, 5431 W. Genesee St., Camillus and at 10:30 a.m. in St. Joseph’s Church where a funeral Mass will be celebrated. Relatives and friends may call Thursday, September 24, 2009 from 4 to 6 p.m. at the funeral home. Rose will be laid to rest in Assumption Cemetery. Contributions may be made in Rose’s memory to the American Cancer Society, 6725 Lyons St., P.O. Box 7, East Syracuse, NY 13057.
To order memorial trees or send flowers to the family in memory of Rose Basile, please visit our flower store.