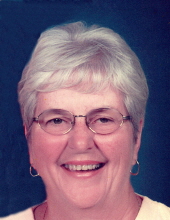 Sheila (Sewell) Lange, 88, of Camillus, passed away Monday at home. Born and raised in Utica, she moved to the Syracuse area in 1967. Sheila received her bachelor’s degree from St. Lawrence University and worked for over 15 years as executive assistant to the bishops of the Episcopal Diocese of CNY, retiring in 1998. She was a member of St. Luke’s Episcopal Church and previously served on the vestry. Sheila enjoyed boating and loved spending time with her family and friends.

Relatives and friends may call Tuesday, November 30 from 10 to 11 a.m. at St. Luke’s Episcopal Church, 5402 W. Genesee St., Camillus, 13031. A memorial service to follow at 11 a.m. Sheila will be laid to rest in Onondaga County Veterans Memorial Cemetery.

In lieu of flowers, contributions may be made to St. Luke’s Episcopal Church.
To order memorial trees or send flowers to the family in memory of Sheila (Sewell) Lange, please visit our flower store.