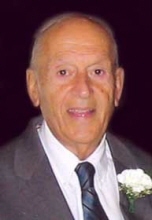 Stanley A. Leccarde, 85, of Syracuse, passed away Thursday, December 29, 2011 at the Hospice House-Woodside in Pinellas Park, Florida. Born on Sunday, March 21, 1926, he was the son of Carl Leccarde and Carmel Gingo Leccarde. He lived in Watertown before moving to Syracuse in 1961. Stanley was a graduate of Watertown High School and a Navy veteran of World War II. He retired from Frigidaire in Syracuse. One whose faith was important to him, he was a communicant of St. Joseph's Church. He was known for his positive outlook, was an avid golfer, enjoyed swimming laps and enjoyed traveling. He also loved spending time with his family. Stanley was predeceased by his wife of 56 years, the former Lora Mary Brown, on June 30, 2003; and his daughter, Linda Lee Leccarde; and sisters, Angie Cook and Jackie Hamilton. Surviving are his daughters and sons-in-law, Susan and Lee Underwood and Lou Ann Leccarde and Jonathan Gavin, all of Syracuse, and Michele and Joseph A. Marascalchi of Onondaga Hill; son and daughter-in-law, Michael and Theresa of Penfield; sister, Rosie Minton of Minnesota; nine grandchildren; one great-grandson; several nieces and nephews; and his close friend, Marilyn Macfarlane of Pinellas Park, Florida. Relatives and friends may call Tuesday, January 3 from 4 to 7 p.m. at the Buranich Funeral Home, 5431 W. Genesee St., Camillus. A funeral Mass will be celebrated Wednesday, January 4 at 10:30 a.m. in St. Joseph's Church. Entombment will be in Resurrection Chapel Mausoleum, St. Mary's Cemetery, DeWitt. In lieu of flowers, contributions in Stanley’s name may be made to the Hospice House-Woodside, 6770 102 Ave. North, Pinellas Park, FL 33782.
To order memorial trees or send flowers to the family in memory of Stanley A. Leccarde, please visit our flower store.