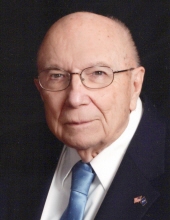 Stephen Vincent Gilligan, 96, of Syracuse, passed away Wednesday. Born in Palmer, MA, he moved to Syracuse in 1953. A graduate of Newark High School, Stephen earned his bachelor's degree in science and engineering from RPI in 1948. He was an Air Force veteran of WWII, the Korean War and the Berlin Crisis of 1961.

Stephen was employed with Carrier Corp. for over 30 years before retiring in 1985 and also retired from the Air Force in the late 1960s as a Lt. Colonel. He was previously employed with International Paper in Corinth, NY and assisted his wife as a librarian throughout her career. Stephen was a communicant of St. Charle's ~ St. Ann's Parish.

Stephen was predeceased by his wife, Joan; and parents, Gerald and Adeline.

Surviving are his sons, Kevin (Eileen) of LaFayette and Stephen (Elizabeth) of Onondaga Hill; and grandchildren, Addie, Benjamin, Louis, Brendan, Moira and Valya.

A funeral Mass will follow at 10:00 a.m. in the church. Stephen will be laid to rest in Onondaga County Veterans Memorial Cemetery.
To order memorial trees or send flowers to the family in memory of Stephen Vincent Gilligan, please visit our flower store.