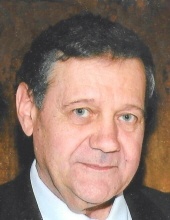 William H. Benderski, 66, of Syracuse, passed away peacefully Monday at Upstate University Hospital after a long battle with cancer.

Bill was born in Syracuse on April 7, 1955. After graduating from Bishop Ludden High School in 1973, he went on to get his radio operator’s license.

Bill proudly worked at Gianelli Sausage for 50 years, holding several positions over the decades. His close co-workers are like a second family. In 1978, he met Debbie and they were married in 1981. In 1982 they had their only child, his namesake, Bill, Jr. Very passionate about music, he could often be found listening to tunes and playing the guitar in his recliner after work and on the weekends. Anyone who knew Bill knew him as a good man, a hard worker, and a loving father and husband.

Bill was predeceased by his parents, Zeon and Stephanie; and his brother, Robert.

Funeral services will be Saturday, October 9 at 11 a.m. at Buranich Funeral Home. Bill will be laid to rest at St. John the Baptist Ukrainian Catholic Cemetery.
To order memorial trees or send flowers to the family in memory of William H. Benderski, please visit our flower store.